Carta now aggregates individual Form 3921’s for ISO exercises into consolidated statements for ease of use. Individual Copy B’s are still available to download if required. These statements will be available in participant portfolios when companies generate their 3921’s.

The enhanced user experience also allows company stock administrators to download the Manage Stakeholder Details report to review all stakeholder records at once instead of in a paginated view within the Administrator Experience. Companies with 50+ stakeholders now have enhanced filter and sorting capabilities (e.g, select one or multiple years to download the Stakeholder details ledger) to better analyze historical data.

There is a new tab for “Exclude Transactions” for further flexibility if company administrators need to suppress reporting on individual option exercises.

The new Form 3921 Dashboard is available now to all companies subscribed to this feature.

Reach out to your CSM to enable Form 3921 reporting if you are interested in upgrading your subscription. Public Market companies will have this enabled by default.

The Mass Issuance report includes additional information on the Issuer's stock program shares to make it easier for the Issuer to move the eligible portion of its stock ledger back to an equity management provider - such as Carta - from the Transfer Agent. This helps preserve critical tax information while facilitating the delivery of public shares to the stakeholder's Carta portfolio for trading.

Experience a secure and smooth data transition as you move your private equity records to a public Transfer Agent.

Are you preparing to go public? Reach out to Carta’s public markets team (carta.public@carta.com) to begin planning your IPO journey.

The Mass Issuance report can be found under your Reports section in Carta.

Customers wishing to allow their shareholders to sell a portion of their holdings prior to a traditional 180-day lockup expiration can now control early lockup release programs through Carta. With Carta’s early lockup release functionality, your company can specify the quantity of shares each shareholder can sell during a specified period.

After gathering this information, Carta will then work with the customer to complete an import template, which will be uploaded to Carta's public platform. Eligible shareholders will now be able to see the quantity of shares they can trade, what they’ve already traded, and what portion of shares is still remaining.

Figure 1: Shareholders can monitor the number of shares they can sell during the early lockup release.

Figure 2: Shareholders are limited to the quantity of shares that they are allowed to sell per the rules of the early lockup release. Quantities can be set specific to an individual.

Trade limits apply across asset types. The sale of long stock, in addition to cashless option transactions, will count against the shareholder’s total allowed quantity to trade, ensuring that the stakeholder won’t oversell per the terms of the early lockup release.

Reach out to Carta’s Public Markets team (carta.public@carta.com) to begin customizing an early lockup release benefit for your employees ahead of an exit.

General partners now have the ability to view and track capital calls from the Carta Android app. Investment firms can now track the progress of on-going and completed calls along with investor details, on the go, straight from the Carta mobile app. 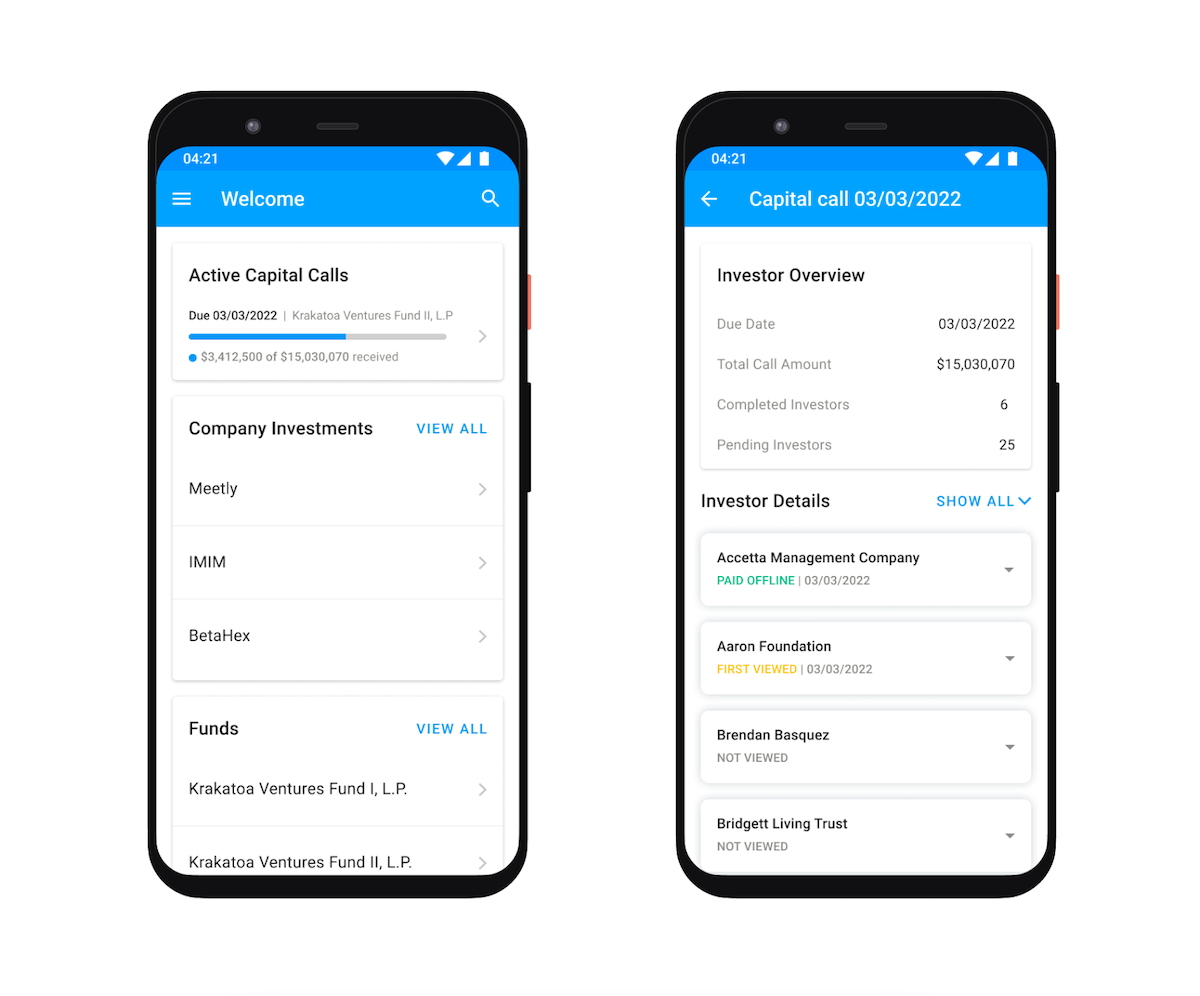 Carta users will now be able to perform a Cashless Hold Exercise and Cashless Sell Exercise on the mobile app. 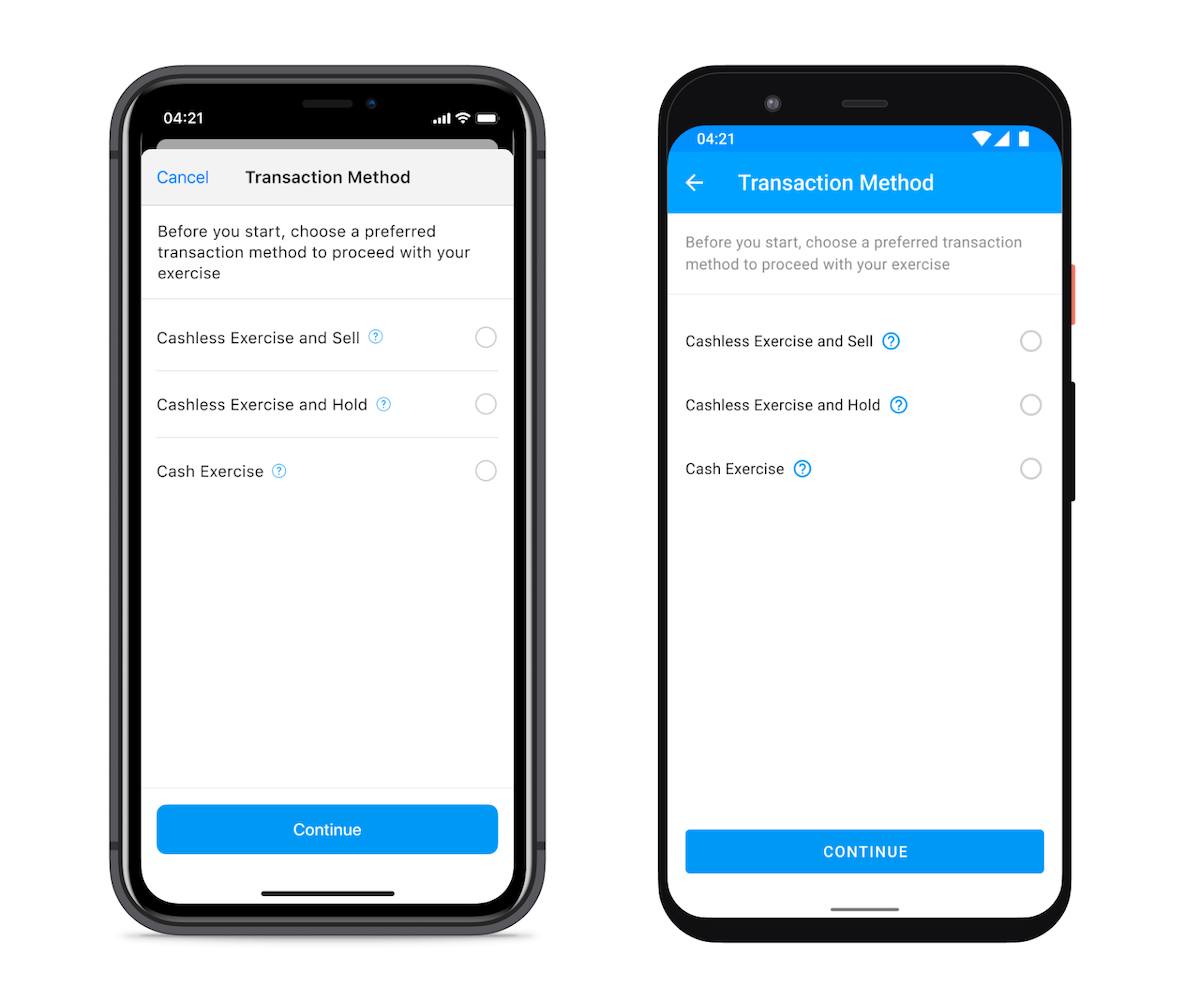 Carta mobile app users will now be able to login using a web-browser on iOS and Android. Web-login gives us the benefits of browser-based authentication, and better security, without disrupting the user experience.

In an effort to bring login and authentication together across all Carta platforms, we are launching browser-based login on mobile. The web-login experience will use Safari on iOS and a default browser on Android. 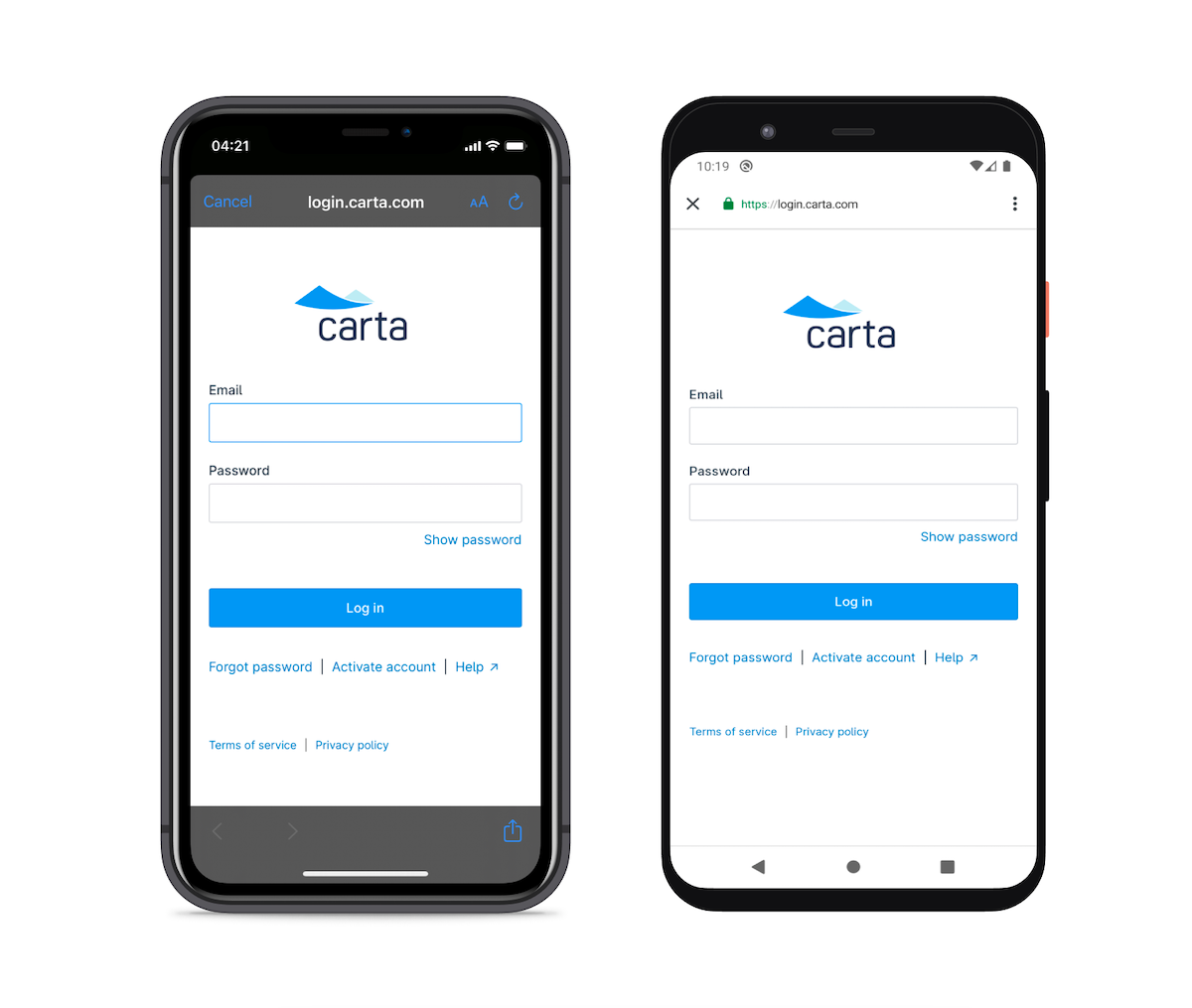 Soon, companies will have access to the updated Capitalization > By Share Class view. This page comes with improved performance for large Cap Tables, allowing you to view and interact with your Cap Table up to 5x faster.

We will continue to improve the experience, adding a new summary visualization to the top of the page, and improving the navigability between the By Share Class and the By Stakeholder Cap Tables.

Soon, Carta customers will start seeing an expanded set of Roles to help you reflect the different individuals who are handling different aspects of Cap Table management.

For now, users assigned to new roles will serve as point of contact for their areas. Over time, these individuals will see updated experiences and be guided to relevant Carta tools.

To see this experience, Navigate to "Company > Permissions and Roles > Roles" 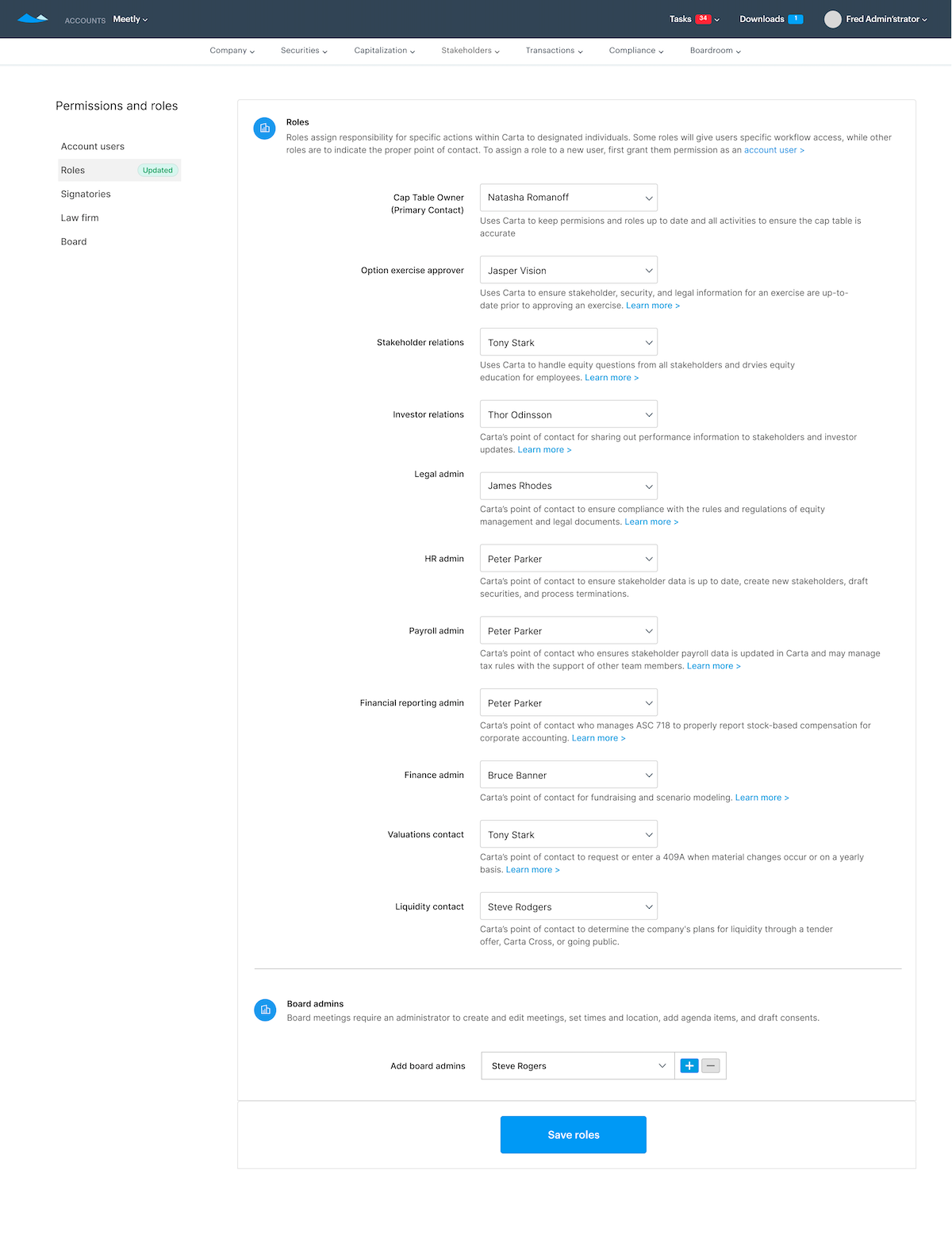 Carta Web now supports the generation of Form 3922 for Employee Stock Purchase Plans in the Company Administrator view. Companies that would normally have access to the Compliance tab, can now request access to Section 6039 from their Customer Success Managers. Form 3922 forms are due to stakeholder portfolios by January 31, 2022. By enabling this functionality in Carta Web, administrators are now in control of the Form 3922 generation and distribution, similar to Form 3921 for Incentive Stock Option Exercises.

NOTE: This feature can be enabled upon request from companies that have an Employee Stock Purchase Plan.

Corporations file this form (3922) for each transfer of the legal title of a share of stock acquired by the employee pursuant to the employee's exercise of an option granted under an employee stock purchase plan and described in section 423(c) (where the exercise price is less than 100% of the value of the stock on the date of grant, or is not fixed or determinable on the date of grant). 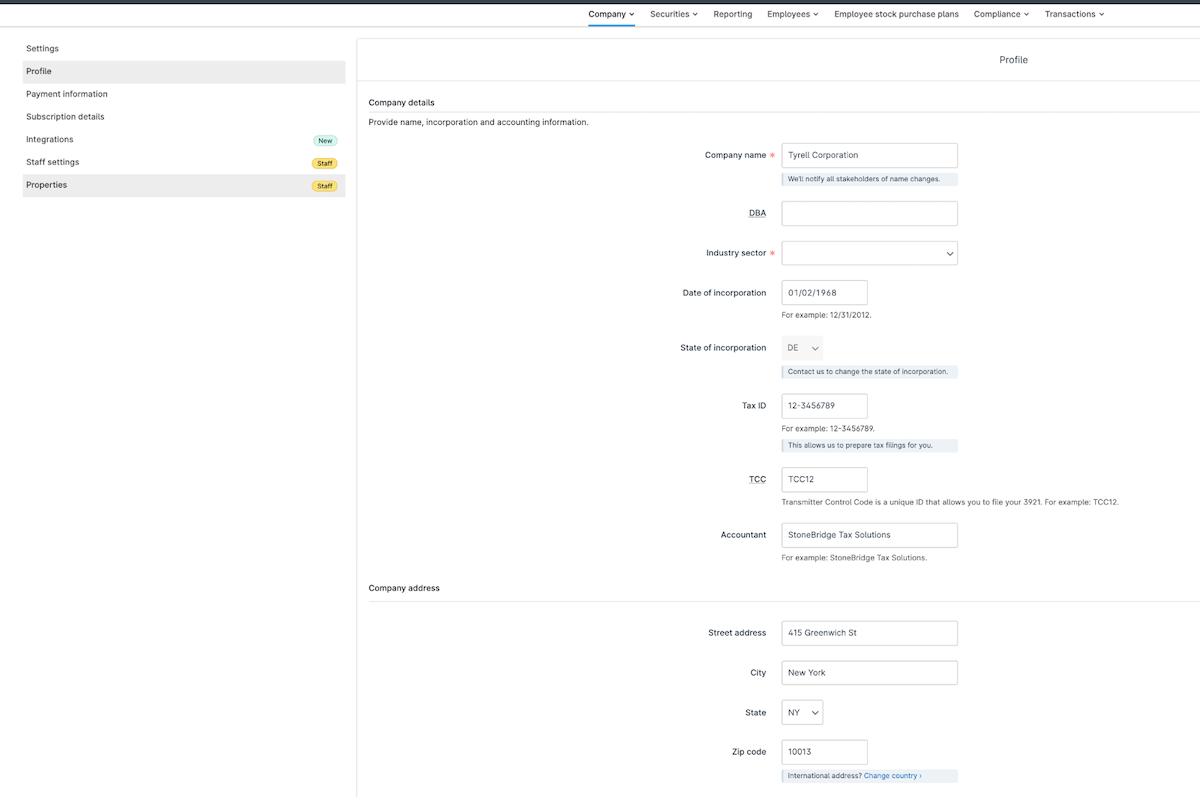 5. If the missing data was entered in, return to the Compliance > Section 6039 page and click Generate to click through the steps to proceed and add company contact information. The company contact is formatted into the electronic Copy A .txt file that will be uploaded to the IRS site.

Click Generate Form 3922 to begin the generation of the files.

6. Refresh the page after some time if you see a spinning wheel or navigate away and return later.

7. Once generated, click Download reports for the tax year to download a .zip file to your local drive that contains all necessary data for Copy A (efile), and Copy B (statements).

The .zip file will be split out into the following three files:

Public and Private Market companies with an ESPP.

This feature can be enabled on demand by reaching out to our support team or Customer Success Managers.

The product team will be enhancing Form 3921 functionality to bring it more in line with the new Section 6039 admin experience.

We are releasing a report to all Private Market companies for administrators to review their certificate cost basis and original acquisition dates. This report will allow administrators to view cost basis data prior to the delivery of 1099B tax statements to stakeholders by mid-February.

This in-app report is available by navigating from Capitalization -> Reporting -> Form 1099b cost basis report.

From this report, Issuers can identify which certificates need to be changed and/or excluded from tax filing, and will have the opportunity to correct the data until late-January.

Who does this impact?

This report will be available to individuals with role permissions of Company Admin, and including Company Editors.

In the next month, Carta's Liquidity team will be reaching out to ensure that data has been reviewed and is considered approved by Issuers for generating 1099B statements. Stakeholders will be able to access tax statements in their portfolios by mid-February.

Create yours, for free!